Power to spare for location portraits

Until recently, I would have rated all "battery powered lights" by their watt second, (Ws) rating only. I admit it is a great place to start so you are comparing "apples to apples." What I can tell you is, the numbers can be deceiving. What exactly is a watt second anyway?

Does that make it clearer? If not, maybe this will help. This is the following statement offered as if to make it all more easily understood: "The energy rating a flash is given is not a reliable benchmark for its light output because there are numerous factors that affect the energy conversion efficiency. For example, the construction of the tube will affect the efficiency, and the use of reflectors and filters will change the usable light output towards the subject. Some companies specify their products in "true" watt-seconds, and some specify their products in "nominal" watt-seconds."[2]

Enough! Let's look at some images to see what all this has to do with photography anyway. I mean, if you can't make a beautiful image, what good is all this knowledge?

I love outdoor portraits! To quote Paul Simon, "I love the greens of summer..." 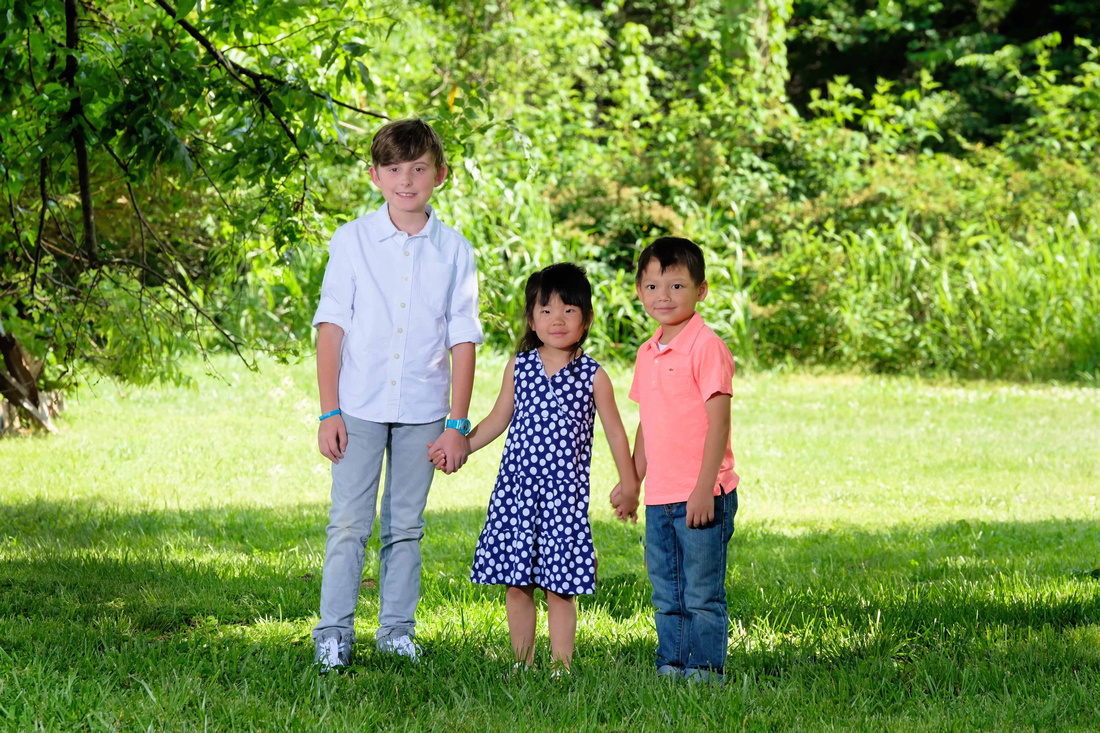 What is better than adorable kids? Nothing!

If you stood the West children in that super bright light, you would have them squinting and complaining, so would I if you stood me there! Placing them in open shade is a great idea, but you have a couple terrible outcomes. First of all, too much of a good thing. Green is great, except when it overtakes the flesh tones and then it looks terrible. By adding a proper amount of fill light from the B2, my colors are beautifully neutral. If you don't do this, or you subscribe to the "I'm an available light photographer" club, you can not pull this off. If you open up to expose them properly, it will look like a scene from "Touched by an angel." They will glow and the background will be blown out, pure white. You may as well take them inside and photograph them on a white cyc wall, it will look the same minus the green grass.

(I know, I know, I should have used a faster shutter speed to knock down the background and blur it out a bit. Shooting above f11 is not my preference. I am a proud Fuji X shooter, but they are missing the boat in one area specifically. There is no HSS available. How can this be? it is 2017 and almost everyone else has it. I have been putting my thoughts together on that and it will be the subject of a future blog)

Just another image, taken on another day with a much larger group. This is our family and it is lit with just one Profoto B2 at full power, 250 Ws pulled way back, maybe 15-20' from the group so I could get even coverage from left to right, and top to bottom.

Our son-in-laws are 6'4 and 6'5 tall. (we are not standing in a hole) Something about the design of the Profoto built in reflector, it is super efficient and gives great coverage. We took about 130 images this day of all the sub groups here. The B2 was full power for many of those exposures. I still had over 50% of the pack left when we were done. I was pleasantly surprised that I didn't need my back up battery.

I have been able to do more with less Ws. Comparing the Profoto B2's that are rated at 250 Ws and my former light that was 400 Ws, there is just a difference in the way it translates into output. And at the end of the day, that is what really counts. Great light, great coverage, consistent exposures and efficient use of power.