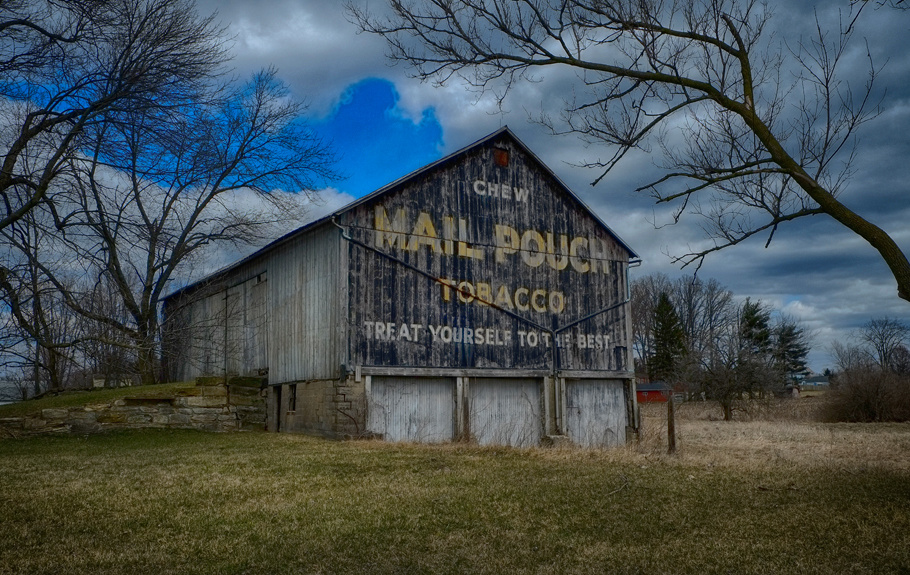 I’ve driven past this barn dozens, maybe even hundreds of times through the years.  But the other day while I was in Ohio, it caught my eye for possibly the first time as an interesting image.  I zoomed past it and thought to myself, that might have been a nice picture.  I was in the car alone at this time so I decided to turn around and take another look.  I’m really glad I did!  Even though it still has a wintery feel, I like the look and the way the bare trees frame the barn.  I could see this as a multiple season image, from green grass through fall leaves and finally the snow of winter.  That would take a considerable amount of work since it’s several hundred miles from Nashville, but it would be awesome.

This is also shot at preserving a passing part of Americana.  There were hundreds of these advertisements in Ohio and West Virginia at one time.  Now, they are a rarity and slowly fading away.  Either the paint is nearly gone or the barn is falling down, there just aren’t many left.

I think the point is that I am shooting for “me” again for the first time in many years.  The joy of making beautiful photographs is what started me in this profession over 40 years ago.  Somehow, it became a job and I rarely shot for my satisfaction or self fulfillment.  I have to say thanks to my great friend Bill Fortney Jim and Snake from His Light Workshops for rekindling that fire that started me seeing again.  There was nothing “magical” about what they did, they just offered a time to look around for a possible photograph then take the time to shoot it.  After that in a classroom setting or at times one on one, they offered valuable feedback as to what looked good or how it could be improved.  Constructive criticism is valuable in every aspect of life!