Men who helped me become the man I am today

Thanks.  It’s a simple word that we may not say often enough.  If we don’t, one day it could be too late for us to say thanks to those that may have mattered most.  I’m sure I’ll miss some if I start naming all the men that have invested deeply into my life.  There are however two in this picture that had an impact that lives in me to this day, and a third that lives on in our children. 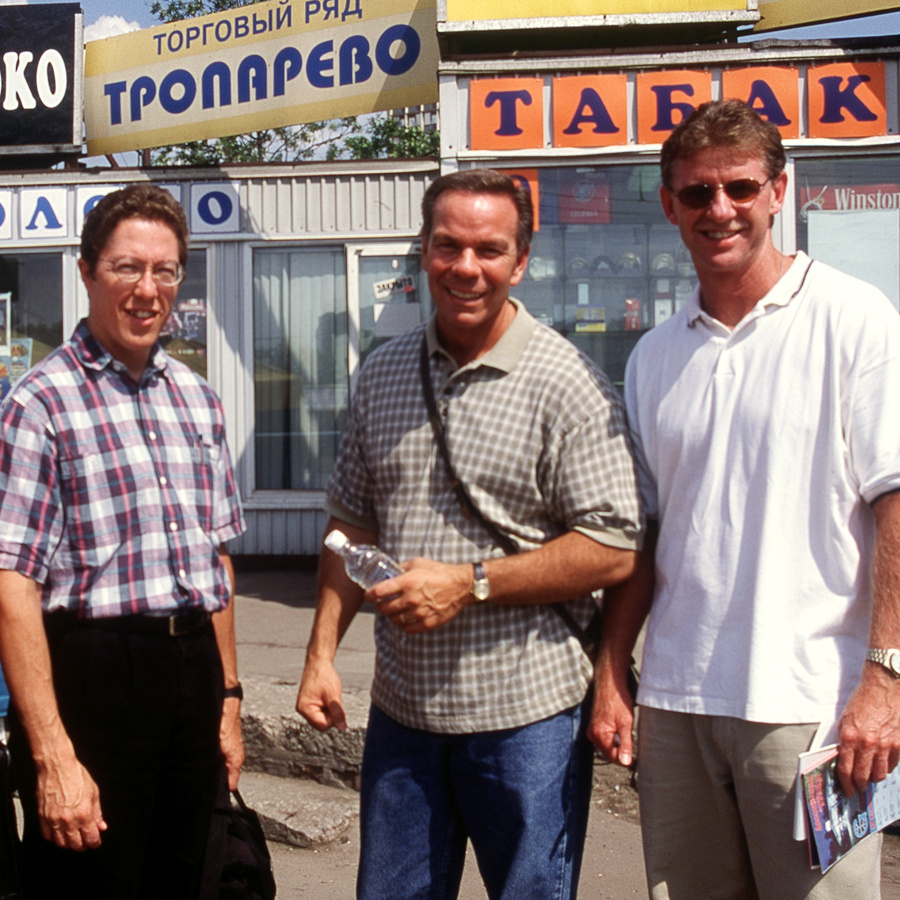 I want to say that this was July of 1999.  We were in Moscow, Russia on a missions trip called the “Volga River Campaign” with about 200 men from First Baptist Church of New Philadelphia, Ohio.  Our goal was to pass out thousands of New Testaments in the Russian language to anyone that would accept it.  It was awesome to have my son along with me on that trip, we were even room mates.  We got to see and experience a lot together.  It was great for me as the dad, but maybe not quite as great for an 18 year old.

Aaron was there because his youth Pastor Bob Valles encouraged them as young men to make this trip.  Bob and his wife invested in our children for most of their high school years, we are grateful for the impact they had on our kids.

The trip had great impact on all of us, but I think especially for those young guys.  For many of them it was their first time out of the country, so it was a real eye opener.  Long flights, customs inspections, terminals with not much to choose from, food that was “unusual” to say the least, corruption at every possible intersection of life.  We were all fighting our bodies that resisted the time change and pushing beyond what we thought was possible (or reasonable).  There are 20 hours of daylight in Russia in the summer…unbelievable!

One of my life long friends Randy Meese posted this quote on his facebook page the other day, and he reminded me that we had to memorize it before this trip.

The Bible contains the mind of God, the state of man, the way of salvation, the doom of sinners, and the happiness of believers. Its doctrines are holy, its precepts are binding, its histories are true, and its decisions are immutable.

Read it to be wise, believe it to be safe, and practice it to be holy. It contains light to direct you, food to support you, and comfort to cheer you.

It is the traveler’s map, the pilgrim’s staff, the pilot’s compass, the soldier’s sword and the Christian’s charter. Here too, Heaven is opened and the gates of Hell disclosed.

Christ is its grand subject, our good its design, and the glory of God its end. It should fill the memory, rule the heart and guide the feet. Read it slowly, frequently and prayerfully.  It is a mine of wealth, a paradise of glory, and a river of pleasure.

It is given you in life, will be opened at the judgment, and be remembered forever. It involves the highest responsibility, rewards the greatest labor, and will condemn all who trifle with its sacred contents.

Unfortunately we don’t know exactly who said this, some say it was Samuel R. Boggs, others would argue and I really don’t know if it matters.  What we do know is that the Gideons place it inside every New Testament they distribute.

The other two men hold a very special place in my heart.  Mark Trotter was my friend and pastor through most of my 30′s and 40′s.  We were learning how to love our wives and raise kids together.  He was helpful and transparent, never acting like he had it all together and admitting that he was just a few weeks ahead of us in the journey.  He taught us to love the Bible and how to read and study it.  Tools that I use to this day as I read or study, and the “filter” I view biblical statements through to discern if they are true and accurate.

Last but not least is Frank Par-Due.  I owe so much of what I used in parenting to what Frank taught me.  I didn’t just get it from his sermons, although he had an incredible ability to take the Words of God and make the light go on in your understanding!  Mostly, I learned from watching him as he loved and served his wife and kids.  He personified what it meant to teach them at all times of the day and to watch for “teachable moments” and take advantage of them!  Frank went home to be with the Lord as a young man, however his words and teachings live on in me and many others.  We have passed them on to our children and soon to our children’s children.

This is in no way an attempt to “deify” any of these guys, they would all hate it.  I doubt if they will even see this, but if they do, they will know that I am forever thankful for their investment in our lives.  I hope that in some small way, I will be able to pass on some of what they taught me to future generations.