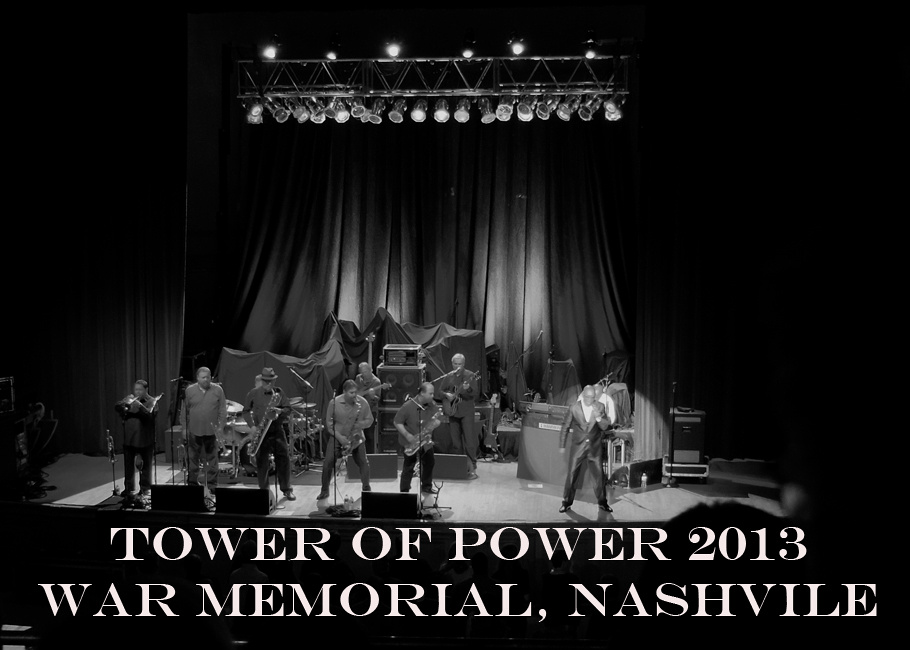 Bucket lists.  It doesn’t matter if you’ve actually written it down or not, most of us have one.  If you’ve ever stated something you would like to see or do before you die, that’s on your list!  For me there are just a few bands that I would really like to see, not many at all really.  But, at the very top of my list was Tower of Power!  (click this link and you can listen to some of their music)  I first heard them either in high school or shortly after, it doesn’t matter, I’ve always wanted to see them live.  Seriously, there aren’t many groups that can boast of a 44 year track record!  I think that 4 of the original members were playing last night.  (May 11th they are in Cleveland, OH in case you are interested)

One of the standout performances was by world class drummer David Garibaldi.  He is literally in the Percussion Hall of Fame, how cool is that?  Rock solid beat and a wicked left hand that hit every “kick” with incredible precision.  Sure I admit I’m partial to drummers, but this was really, really solid!  My only complaint was that from our seats he was blocked by “Doc” so we didn’t get to see him as well as we would have like to.

That said, they are all super talented musicians that exceeded my expectations.  It’s really gratifying when you’ve looked forward to something for that long and it turns out to be everything you hoped it would be.  Money well spent and a night that I won’t ever forget.

I won’t bore you with the rest of my bucket list, because it is pretty short.  I think that as a cancer survivor, there are fewer “things and places” that are that important to me.  Sure, I’d love to take the love of my life to Hawaii sometime before we are too old to enjoy it.  I also have a really ambitious motorcycle ride that I’d like to make too, it will take about three to four weeks.  Realistic?  Who knows.  Part of the fun is dreaming and planning these things irregardless of the outcome.  It’s biblical too, “where there is no vision, the people perish.” Proverbs 29:18  When I was recovering from my cancer nearly five years ago, I started watching shows that featured different restaurants.  There were a few that really interested me and I would tell Marlene, “when I get better I want to take a bike trip there.”  She would always agree and encourage me to plan it out and make it happen.   I literally made a list of a few of those places, and I can tell you that I’ve been able to cross a few of them off!  It’s not about the actual meal, it’s just reaching a goal.  One little thing to look forward to that would help take your mind off of the treatments and reality of all that meant.

By the grace of Almighty God, I am very much alive, very healthy and very thankful!  I’ve been able to see our youngest daughter marry her husband and am now the “Bapaw” to three (soon to be four) beautiful grandchildren.  None of them were born when I was diagnosed.  That is a huge blessing in itself.  Add to that, the many, many blessings the Lord has given us, far too many to list.  His mercies are new every morning. Lam. 3:23  I can tell you that without the promise of eternal life with my Savior, I don’t know that I would have made it through those months of treatments and recovery.  All praise and glory belongs to Him!