You can’t read many photography related blogs or forums without that word appearing somewhere on the opening pages.  In my opinion, it is the most incorrectly used word I hear on a daily basis.  The fact is, very few people understand the word or its origin.  Hey, let’s see what Wikipedia says about it.  You want to?

Please note right off the bat that it has nothing to do with any specific photographic lens.  More specifically a Canon 85 f1.2, or any other “magical” tool.  (that lens does have a wonderful look, but so does their 85mm 1.8 or the Nikon equivalent at roughly at 1/4 the of it’s price!  The Sigma 85mm 1.4 has a beautiful bokeh at under $1,000.00.  It’s just the appearance of the background in the final image.

Additional info from Wikipedia:  The English spelling bokeh was popularized in 1997 in Photo Techniques magazine, when Mike Johnston, the editor at the time, commissioned three papers on the topic for the March/April 1997 issue; he altered the spelling to suggest the correct pronunciation to English speakers, saying “it is properly pronounced with bo as in bone and ke as in Kenneth, with equal stress on either syllable”.[4] The spellings bokeh and boke have both been in use at least since 1996, when Merklinger had suggested “or Bokeh if you prefer.”[10] The term bokeh has appeared in photography books at least since 1998.

Christmas week our son was home and this came up in conversation.  He is a very creative photographer with a bit of a twist.  He also wants to understand the technical part of it so he can control his image in camera without a lot of post production.  We had time to set up this little scenario and see how different openings affected the final image.  So, if a picture is worth a thousand words, here are a few images that illustrate the effect.

f5.6 You can still see the outline of the ornaments, but they are fading 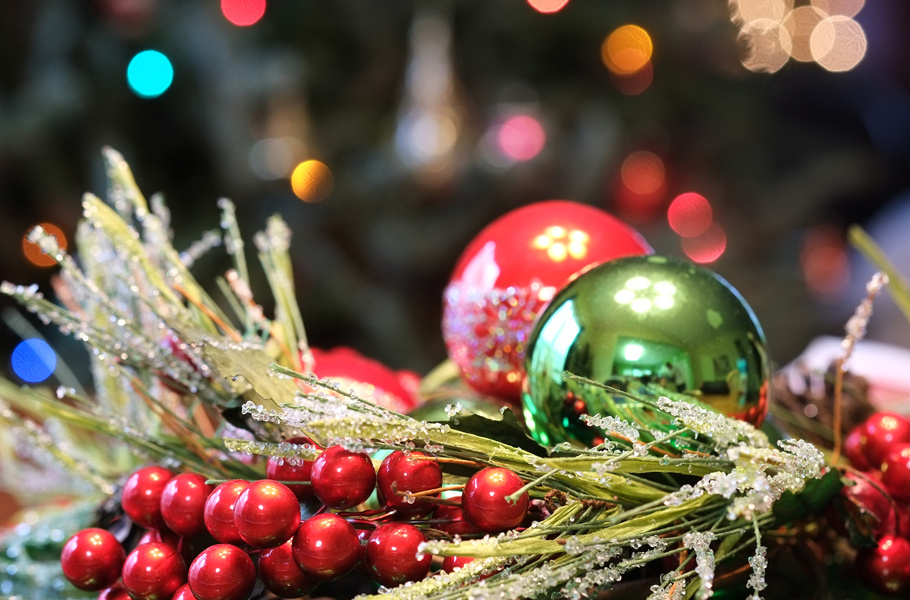 Let me muddy the water just a little bit.  There are so many variables that control what your background will look like.  Not only does your shooting aperture affect the appearance, but so does your focusing distance, specifically the distance from camera to subject.  The closer you are (like with a macro lens as above) the depth of field is greatly reduced and the effect emphasized.  Two lenses that have shallow depth of field characteristics are macro and telephoto, so the effect is best with those.  You want to see it for yourself?  Simple, just fill the frame near minimum focus as close as you can get to your subject, take the photo and there it is!

One final addition from the Wiki site:  Bokeh characteristics may be quantified by examining the image’s circle of confusion. In out-of-focus areas, each point of light becomes an image of the aperture, generally a more or less round disc. Depending how a lens is corrected for spherical aberration, the disc may be uniformly illuminated, brighter near the edge, or brighter near the center. Lenses that are poorly corrected for spherical aberration will show one kind of disc for out-of-focus points in front of the plane of focus, and a different kind for points behind.

Conclusion:  Bokeh is real and beautiful when it happens as a result of using the right lens, the right way.